Boardmasters is undoubtedly Cornwall’s biggest festival and has been growing in size dramatically over the last few years, hosting 50,000 people this year! Boardmasters is a great festival due to its fusion of both music and extreme sport in an area of the UK which is manly deprived of opportunities to watch both without travelling – not to mention what a beautiful location it is!

Friday headliner Catfish and the Bottlemen proved why they are a headline act with a great set full of all of their hits.  In a UK festival exclusive, the Godfather of Grime, Kano, also delivered an unforgettable set. British pop sensation RAYE hyped the crowd with an animated set featuring recent radio staples ‘Decline’, ‘Friends’ and ‘You Don’t Know Me’.

Elsewhere, The Land of Saints stage saw sets from an eclectic mix of bands including indie rockers Everything Everything, alt-rockers Ash and 2017 British breakthrough band The Amazons.

Personally I find the choice between staying at the festival site and travelling into Newquay a difficult one so on Saturday we decided to head down to Fistral Beach to watch some of the sport.

The atmosphere down at Fistral really is something else, a particular favourite being the Marley sessions at the beach bar. This part of the festival is really something that nobody should miss, you really don’t get the whole vibe of the festival until you have spent the day watching the surf, skate and BMX and wondering around the variety of food stalls on offer.

One thing to be careful of when travelling to Fistral is how you are going to get there … queues for the busses can be horrific (we had heard of people waiting for over 2 hours to get a bus back to the festival site) as well as expensive. However, if you leave the festival in your car you will have to pay an extortionate fee to re-enter the festival car park, I think this is more than parking is initially! This is something that we hope Boardmasters really address next year with more busses needed and maybe the bus fare being included in the price of your ticket.

Saturday night’s music on offer was not really to my taste. Chemical Brothers, Annie Mac and Lily Allen headlined their respective stages and I wasn’t particularly interested in watching any of them so swapped between them all, soaking up the atmosphere of each respectively. 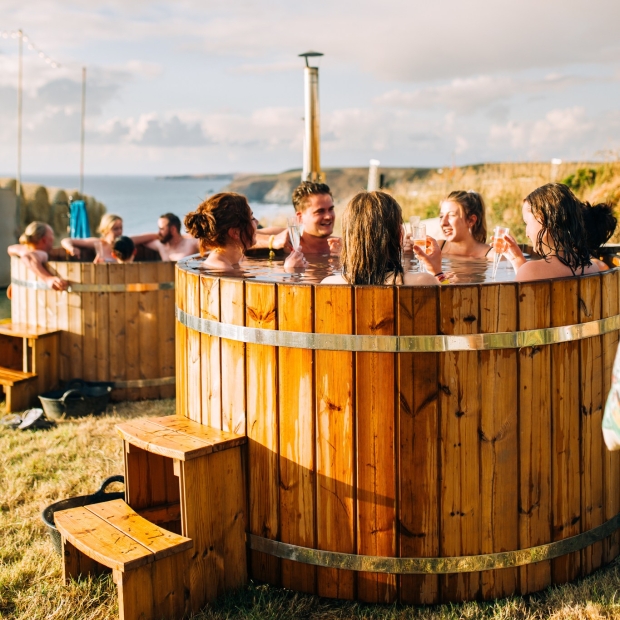 During our time at Boardmasters, we were lucky enough to have the opportunity to try out Kernow Springs, just on of the extras put on to enhance the Boardmasters experience. The handcrafted wood fired hot tubs with hot showers, sauna room and chill out area made this experience one of the highlights of the weekend. It’s also pretty nice after 3 nights of camping in the rain to relax and get clean in this eco-friendly spa. This is also something I haven’t seen at other festivals and well worth the £20 charge for an hour session.

The final night at Boardmasters this year featured one of the stand out acts of the weekend for me, George Ezra. His hotly anticipated main stage headline slot was filled with summer playlist staples including ‘Shotgun’, ‘Budapest’ and ‘Paradise’ as night fell across Watergate Bay. Another favourite of the day was Declan Mckenna, a young British singer songwriter with an equally young band who really connected with the crowd, particularly when he slipped over in the rain when leaving the stage to get up close with the crowd.

Overall it was an extremely wet weekend but one we enjoyed nevertheless – I mean should you expect anything else from a British summer? Roll on Boardmasters 2019.